*This article was originally published by Per Curiam, Published by the Appellate Practice Section of the North Carolina Bar Association. To read this article in its original publication, please click here. 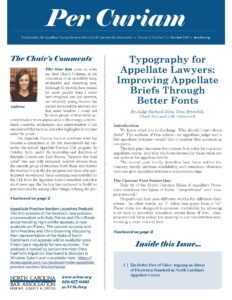 We know what you’re thinking: Why should I care about fonts? The authors of this article—an appellate judge and a few appellate lawyers—would like to answer this question in two parts.

The first part discusses the current font rules for our state appellate courts, and why the fonts favored by those rules are not optimal for appellate briefs.

The second part briefly describes how fonts within the Century family increase readability and retention—features that can give appellate lawyers a competitive edge.

Proportional font uses different widths for different characters. In other words, an “i” takes less space than a “w.” These fonts are designed to promote readability by allowing your eyes to smoothly transition across lines of text. Also, proportional fonts mimic the spacing in our handwritten text, creating a more natural look.

Non-proportional fonts, in contrast, use the same width for each character. In other words, an “i” takes up the same space as a “w.” These fonts were designed for editing documents typed on typewriters. See Matthew Butterick, Typography for Lawyers 81 (2010). Back then, the only way a typewriter could white out a letter was if every letter was the same size. See id.

Unfortunately, neither Times New Roman nor Courier was designed for brief-writing. What is more, neither of these fonts is particularly good for appellate briefs.

This is Times New Roman. It was developed in the 1920s by a British newspaper, The Times of London. It was designed for a specific purpose: to allow speed-skimming the newspaper’s articles. See U.S. Court of Appeals for the Seventh Circuit, Practitioner’s Handbook for Appeals § 23, at 131-32.

The letters in Times New Roman are narrow, closely spaced, and designed to force readers’ eyes across the page as quickly as possible. Another benefit of this closely spaced font was that it left ample space for advertisements. See Tom Vanderbilt, Courier, Dispatched, Slate (Feb. 20, 2004), http://www.slate.com/articles/business_and_tech/design/2004/02/courier_dispatched.html (last visited June 8, 2016). It was not, however, designed for intensive reading—for example, reviewing lengthy appellate briefs. The emphasis was on speed, not retention.

Today, for whatever reason, Times New Roman has become the standard. As one commentator has remarked, Times New Roman is “the font of least resistance.” See A Brief History of Times New Roman, Typography for Lawyers, available at http://typographyforlawyers.com/a-brief-history-of-times-new-roman.html (last visited June 8, 2016). It “is not a font choice so much as the absence of a font choice.” Id. It is the beige of fonts.

This is Courier New, a font within the Courier family. Courier was developed by IBM in the 1950s, but it became the standard typewriter font in the 1960s. See Vanderbilt, Courier, Dispatched.

Courier’s original purpose had even less to do with reading retention than was the case with Times New Roman. As described above, this “proportional” font uses letters that are all the same size, making it easier to edit documents on a typewriter using white-out. At the time, this function was new and streamlined.

Even after typewriters began to die out in the 1980s and 1990s, Courier New stuck around. Perhaps it was because writers found it familiar. Eventually, it became the basic font for computer processing. See id. From there, like Times New Roman, it gained popularity because of its ubiquity, not its attributes.

Recently, governments and private companies have started to reject Courier as an old, outdated, and “clunky” font. See id. Like all nonproportional fonts, Courier is not an efficient use of each page because it takes up more space than necessary.

It is also more difficult to read than newer, better-designed fonts. See 7th Cir. Practitioner’s Handbook at 132. This is, in part, because “[w]hen every character is the same width, the eye loses valuable clues that help it distinguish one letter from another.” Id.

Apart from the “proportional”-vs.-“non-proportional” nomenclature described above, fonts can also be separated into two groups: “serif” or “sans-serif.”

Serif fonts are characterized by small ticks extending off the ends of characters, like at the top of this “J.” Serifs matter because they help our eyes separate lines of text, similar to how you might use a ruler to underline a row of text. Times New Roman and Century Schoolbook are examples of serif fonts.

Believe it or not, these tiny ticks have a real impact. Researchers have concluded “that long passages of serif type are easier to read and comprehend than long passages of sans-serif type.” See 7th Cir. Practitioner’s Handbook at 129. One study found that, readers retained texts in serif font nearly 10% better than they retained equivalent texts in sans-serif fonts. See Michael Gasser, et al., The Influence of Font Type on Information Recall, 7 N. Am. J. Psychol. 181 (2005).

These numbers are significant. A 10% increase in an appellate court’s retention might mean the difference between winning and losing on appeal. That’s a lot of competitive edge just for a few clicks of your mouse.

Fonts in the Century Family = Better Readability and Retention

One particular type of serif font has emerged as the favorite of appellate courts: fonts within the Century family.

Century Schoolbook, in particular, has been called the “crème-de-la-crème of legal fonts.” Mark Wilson, 5 Non-Times New Roman Fonts Courts Use in Their Opinions, Greedy Associates (Nov. 26, 2014), http://blogs.findlaw.com/greedy_associates/2014/11/5-non-times-new-roman-fonts-courts-use-in-their-opinions.html (last visited June 8, 2016). Among its attractive features, it is “highly readable, yet commands an air of authority with letters that take up more space than Times New Roman.” Id. Typography for Lawyers ranks Century Schoolbook on a short “A list” of fonts. Times New Roman and Courier New, by contrast, made the “C list” of “questionable” fonts for lawyers.

The Seventh Circuit has offered this explanation for this choice:

The briefs, opinions of the district courts, essential parts of the appendices, and other required reading add up to about 1,000 pages per argument session. Reading that much is a chore; remembering it is even harder. You can improve your chances by making your briefs typographically superior. It won’t make your arguments better, but it will ensure that judges grasp and retain your points with less struggle. That’s a valuable advantage, which you should seize.

The quick brown fox jumps over the lazy dog. (Courier)

The quick brown fox jumps over the lazy dog. (Arial)

*To view the different fonts please view the PDF article above.

We can (hopefully) all agree that appellate briefs ought to be written in a font that serves two purposes: readability and retention.

After all, appellate briefs are not meant to be quickly skimmed over a morning cup of tea along with newspaper advertisements (The London Times’ Times New Roman). Nor are they meant to meet the mechanical needs of a typewriter’s white-out function (Courier New).

As the Seventh Circuit explained, “The Times of London uses Times New Roman to serve an audience looking for a quick read. Lawyers don’t want their audience to read fast and throw the document away; they want to maximize retention.” 7th Cir. Practitioner’s Handbook at 131.

In view of the Supreme Court’s use of Century Schoolbook, perhaps the Court will amend the Rules of Appellate Procedure to endorse that font or adopt other font reforms based on the issues discussed above. The authors are hopeful that this article may be useful in inviting a dialogue on the topic.

While fonts may not be at the top of everyone’s list of important items to tackle, we hope that this article was thought-provoking.

We welcome your comments on the information in this article. We would love to pick up this discussion with you by phone or by e-mail—particularly if your e-mail is written in Century Schoolbook.

Drew Erteschik is a partner in the Raleigh office of Poyner Spruill LLP. He is a board-certified appellate practice specialist who has embraced Century Schoolbook for all his writing needs.

Clark Tew is a litigator with Homesley & Wingo Law Group in Mooresville, concentrating his practice on employment and labor law. Despite his firm support for Century fonts, Clark hypocritically writes his personal documents in Iowan Old Style.

J.M. Durnovich is a trial and appellate litigator in the Charlotte office of Poyner Spruill LLP. His go-to font is Century Schoolbook.

◀︎ Back to Thought Leadership