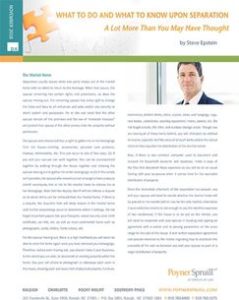 What To Do and What To Know About Separation: A Downloadable Resource

North Carolina is a no-fault divorce state. That means that neither spouse needs to establish that the other is at fault in order to be entitled to a divorce. A divorce is granted so long as the husband and wife have lived separate and apart for one year following the initial date of separation, with the intention of ending the marriage. No matter how much the other spouse would prefer not to be divorced, if you have lived separate and apart from him or her for one year with the intention of ending the marriage, you are entitled to a divorce. The proceeding to obtain an “absolute divorce” (after the full year of separation) is quick and easy. You will not need to testify; nor will your spouse.  You will not even have to appear in court. You will simply receive a phone call or e-mail letting you know “you are divorced” and a copy of the formal Judgment for Absolute Divorce for your records. That document is a public record.